A Knack For Settling Scores

Goals, runs, touchdowns, buckets ... these are the items to strive for in team sports. Sure, that's not everything that goes into the concept of the team game. However, the object of these competitions (save golf) is to score more points than the opposition. If your team has someone that specializes in securing points, it's usually a luxury. By the end of this college basketball season, at least 13 Division I players will have reached or topped 2,000 career points.

Over the last couple of weeks, two of them made history by becoming the 9th and 10th Division I players to score 3,000 points over their careers. Last weekend, Campbell guard Chris Clemons reached the prestigious mark, even though the Fighting Camels lost to Presbyterian. On Saturday, South Dakota State forward Mike Daum made a late push to pass the mark in a rallying, overtime win against rival South Dakota. 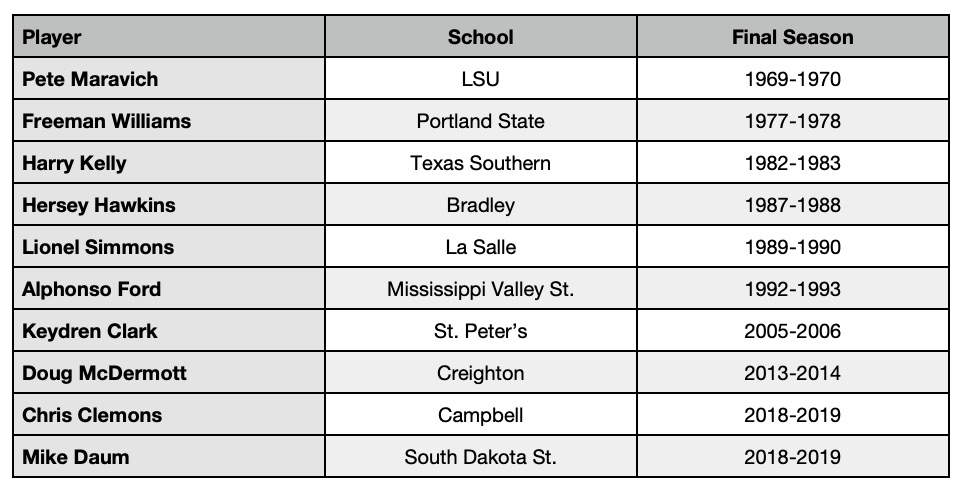 So many things have to go right to make it to this point. Health is imperative (not missing a half-season and burning eligibility). Instant opportunity is catamount (getting significant minutes, even from the bench). And the chance to get a few extra games here and there helps. When comparing the members of this club, that's where distinctions can be made.

Campbell and SDSU have both played in 12 postseason games over the last three seasons, even if both programs have gone about that different ways. The Jackrabbits are three-time defending Summit League tourney champs, with one-and-done results in the corresponding NCAA tournaments. The Fighting Camels fell short of the Big South title all three years, but made it up with a CBI and a CIT appearance (events that didn't exist until 2008 and 2009, respectively). Of the rest of the list, only McDermott had the option to participate in those events.

Two more innovations that separate members of this list are the shot clock and the three-point line. The NCAA introduced its first in-game countdown in 1985. Before 1986, the demarkation wasn't used throughout all of college hoops. When diving into the stats for this list of players, you won't find any three-pointer numbers for Pete Maravich, Freenab Williams, or Harry Kelly (Hawkins had 118 makes over the last two seasons of his career). These men also didn't not have to worry about a limit to putting up another shot. The introduction of the shot clock and evolution of the three-ball have changed all levels of basketball. But it does raise a couple of good questions.

First, why aren't there more players reaching for this mark? You can understand why some of the old-school legends couldn't quite get there. Oscar Robertson, Jerry West, Larry Bird, Joe Dumars, Kareem Abdul-Jabbar, and others didn't have the advantage of an extra point on long-range attempts. But this mark was also unreachable for distance specialists like J.J. Redick, Stephen Curry, Gerry McNamara, Buddy Hield, Dennis Scott, and others could not crack that point barrier. It speaks to the staying power of Clemons and Daum.

Finally, how great was Maravich? The man that started this list is still the leader of it. "Pistol" Pete's 3,667 points outpace Williams (2nd overall) by 418. Although his shooting percentage wasn't stellar (43.8%), he made up for it with sheer volume (most career field goals made at 1,387). Oh, and because of rules prohibiting freshman to play, he did all of this over just 83 games. That's absurd!

As Clemons and Daum close out there careers with dreams of bigger team goals, they can be assured that their place among college basketball individual lore is safe. It may be a while before guest No. 11 can enter this exclusive club, so let's tip our cap to two men that have taken the most fundamental stat of the sport to legendary levels.