It shows the most famous pose in sports. It may be the famous individual award in sports. And, for the moment, it resides in a familiar spot. The Heisman Trophy has been awarded to the best collegiate football player in the country since 1935. The laundry list of names spans the elite programs in the game's history (from that year forward).

Lately, the trophy has pretty much resided in the southern tier of the country. The last two years, that focus has been on one campus. Just after the 2018 trophy was awarded, an article was written on the historic feat completed by Oklahoma coach Lincoln Riley. His status among coaching legends is still being built, having led two Heisman winners in his first two seasons as a head coach. But that legend could grow to unprecedented status if he could pull off the unthinkable.

During the quarterback's three seasons in Tuscaloosa, he:

In those years, Hurts was seen more as a running-threat QB with limited throwing capabilities. His most prolific season was that freshman year (2,780 passing yards, 23 pass TDs, 9 INTs, 954 rushing yards, 13 rush TDs). In his first four games under Riley tutelage, Hurts projects numbers far exceeding his best stats (including presumptive bowl game, 4,209 rush yards, 1,440 rush yards, 55 total TDs). The quarterback could also project as a draft-worthy prospect for the NFL.

That would all be due to Riley's prowess coaching up quarterbacks (no offense to Nick Saban). He's one of 13 coaches to lead multiple players to hold that trophy. Only four represent three trophies in their legacies. But no school, let alone a coach, have had players win this honor three straight seasons. This would put the current Oklahoma sideliner in a group of his own making. It would be great ... but would it?

One match that doesn't usually sync up with Heisman seasons are championship finishes. Of the 84 times that the trophy has been handed over to the college player, only 16 of them went on to win a national title that same season. 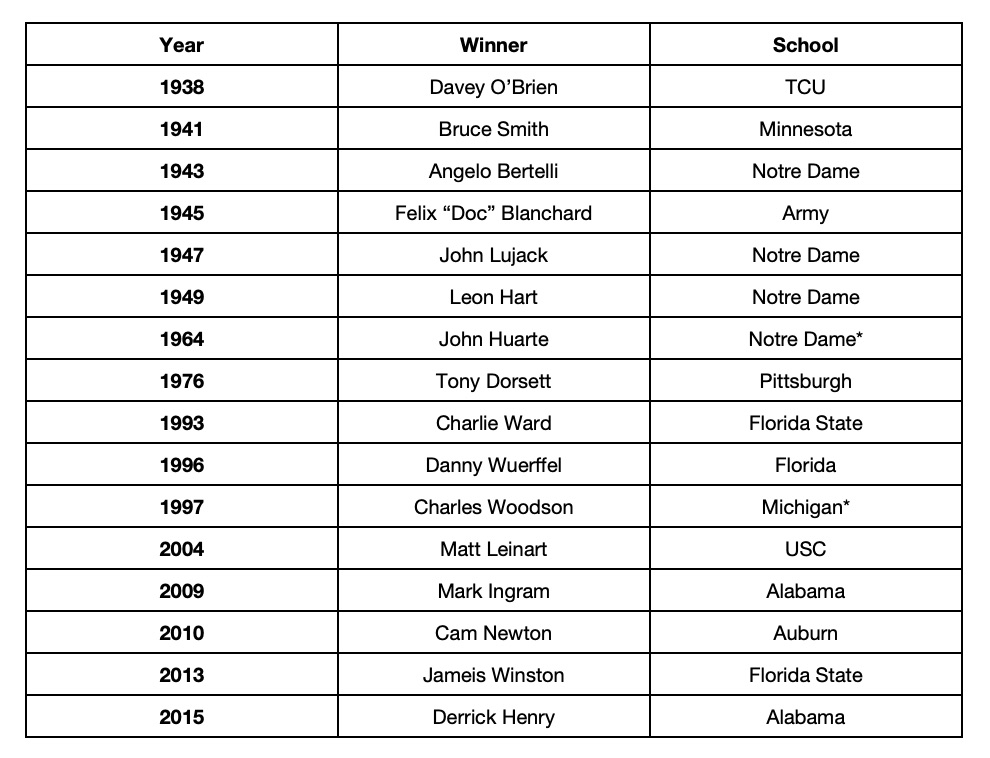 (*) School had a share of the national title that season

The bad news about this sparse stat is that Riley knows all too well about failing in the search for the ultimate prize, losing the last two years in the national semifinals. The good news is that, as you can see above, there's a recent trend of Heisman winners also lifting the most-prized trophy in the sport.

If Hurts can deliver on both for Riley, the coach's status may reach a level we'll never see again. And that would only make us wonder who he'll coach to a Heisman in 2020.